Jadeite (French for jade, jade) is a green-colored mineral. It takes its name from jade. Jadeite has a very similar appearance to nephrite (in the nomenclature, both minerals have a common name, jade), but it is less frequently found than nephrite and is valued more (in particular the so-called imperial, a translucent or transparent emerald-green variety of jadeite, homogenous in color and structure). Jade is also harder and more durable than nephrite.

And this is what we are going to talk about!
⠀
The famous Hutton-Mdivani necklace, has its own mystery. The origin of the stones using to make these necklaces have not been traced yet. All we know is that they all came from the same piece, which most likely belonged to the Chinese imperial court. The necklace consists of 27 large bright green beads between 15 and 19 millimeters in diameter, which are characterized by perfect purity and a smooth texture. The necklace is also adorned with a large Art Deco ruby and a diamond clasp designed by Cartier jewelers.
⠀
Over the years, this necklace has been the property of famous people. For example, Barbara Hutton, the heiress of trading magnate Frank Woolworth (the richest woman in the United States at the time). According to one version, Woolworth gave the jewelry to Barbara as a wedding present to the Georgian Prince Alexis Mdivani in 1933. In 1933, the antique jadeite thread was transformed into an elegant necklace by Cartier jewelers. They invented a clasp inlaid with ruby princesses, which Hutton then played with the bracelet.
⠀But there is also a version according to which the necklace was made back in the eighteenth century and simply bought back by Woolworth.
⠀After Hutton and Mdivani's divorce, which happened just two years after the wedding, the necklace stayed in the Mdivani family. It was keep there for almost 50 years and periodically worn by Alexis' younger sister Nina. True, the necklace did not bring happiness to the Mdivani family - a month after the divorce, Alexis crashed in a car accident. Nina Mdivani (incidentally, she was the wife of Conan Doyle's son) lived a long life and led a miserable existence in her old age, but the necklace has never sold. She was rumore to have hidden it under her deathbed when debt collectors came to the house.

⠀A year after her death, in 1988, the necklace put up for auction. Then it went under the hammer for $ 2 million. Just six years after its auction debut, the resale brought $4 million. Not long ago, at an auction in Hong Kong, the necklace was sell for the third time - this time it brought its owner $ 27.4 million. So, time has no power over it. 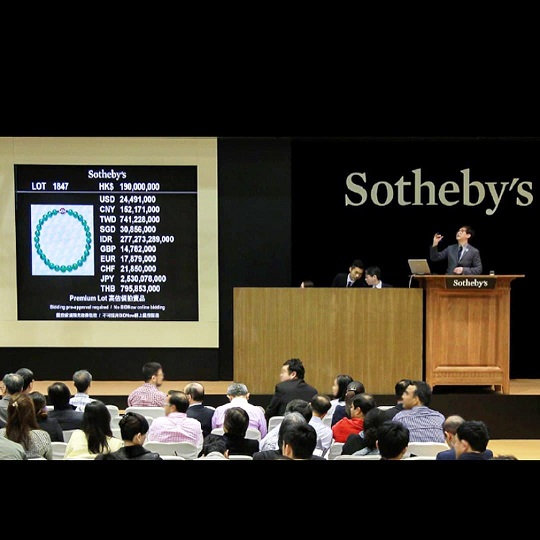