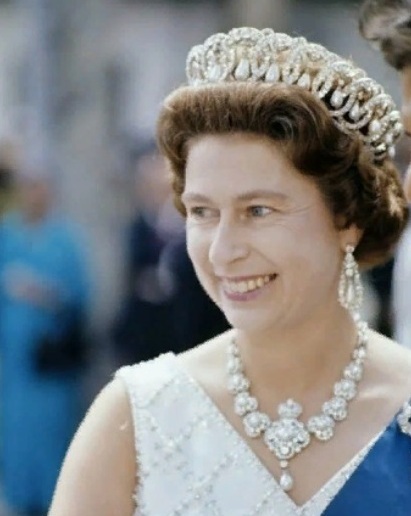 In the summer of 1917, dressed as a lady, Albert Stopford entered the Vladimir Palace. The apartments of the Grand Duchess were on the second floor: a Louis XVI-style sitting room, a study, a boudoir, a bedchamber and four other rooms. The 244 jewels, including the Vladimir tiara, were in the boudoir. The thief opened a secret door and put the stolen things into suitcases. Due to his English citizenship, he got through all the cordons without hindrance...

So, let’s talking about the tiara, one of Elizabeth II's favorite jewels. Are you surprised? Yes! This tiara comes from the Russian Empire. 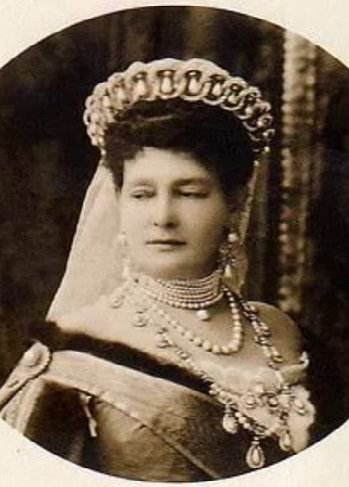 Grand Duke Vladimir Alexandrovich (and the tiara is named after him) was the third son of Emperor Alexander II and uncle of Nicholas II. In 1874 he married Princess Maria of Mecklenburg-Schwerin, who in marriage was called Maria Pavlovna.

In 1890, Maria Pavlovna commissioned the court jeweler Bolin to make this exquisite piece of jewelry. The jeweler used a combination of diamonds and pearls - this was in fashion at the end of the 19th century. The tiara pattern forms with intertwined rings dotted with diamonds and connected at the top. On the other side, by an undulating diamond band to which pearl pendants are attached.

In 1920 Maria Pavlovna managed to emigrate. She left Kislovodsk, and many of her jewels remained in a hidden room in the Vladimir Palace at 26 Palace Embankment, St Petersburg. British intelligence agent Albert Stopford received precise instructions from Maria Pavlovna as to the whereabouts of the jewels. The treasure-trove of 244 jewels of excellent quality, including the Vladimir tiara, was partially smuggled abroad. The jewelry managed to get abroad as early as the summer of the 17th year, before the new government could get its hands on everything.

Maria Pavlovna died in September 1920. She bequeathed her famous collection to her children. So, the tiara was left to her daughter, Princess Helen Vladimirovna, wife of Prince Nicholas of Greece. The tiara purchased from her in 1921 for 984 thousand pounds by Queen Mary, grandmother of Queen Elizabeth II of England.

The Vladimir’s tiara is easy to recognize by two types of pendants: the original pearl (in the form of drops) and emerald.

The emerald pendants made by order of the first British owner, Mary of Teck, who believed that pearls were not suitable for all her costumes, and had her 15 Cambridge emeralds polished as drops by a well-known jeweler - so the second set of pendants appeared.

Elizabeth II inherited the tiara after her grandmother's death in 1953. She often appears in it at official ceremonies and also, lent it to Princess Diana and Prince Charles' second wife, Camilla Parker-Bowles.

According to the most conservative estimates, the value of the tiara reaches several tens of millions of pounds sterling. However, taking into account its historical value, it could be much higher.